Last Tuesday, the children travelling on the school bus from the amazing Arco Iris school in Urubamba back to their homes in Ollantaytambo, were accompanied by a very special guest: Spiderman, who was spending his last day with MSH, taking a look at our school bus project.

On the bus, Alan got to know some of the children MSH is currently supporting, immediately making friends with them and overall enjoying a very special bus ride. The children were super excited as well, being joined by a grown-up in such a funny costume.

Spiderman with two of the children MSH suppports


After getting off the bus, Spiderman headed to another big event: Lourdes´ birthday! Lourdes turned 20, so we had a party for her in the volunteer house. This was the second birthday party in her life (her first one was last year), after having lived hidden away in her house for years. She invited her deaf friend Nayra and together with her sister, the MSH volunteers, Spiderman, and some friends from Sacred Valley School, the house was quite crowded!

Lourdes with her friend Nayra


The birthday cake was made by the mother of a girl MSH supports in Cusco and was simply delicious. As Peruvian custom has it, Lourdes had to take the first bite and was pushed into the cake by Nayra, much to everyone`s amusement. 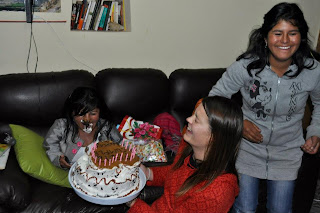 Lourdes, our physiotherapist Mercedes and Nayra


Lourdes and her sister got to stay over at the volunteer house, also quite a special experience for the two. They slept in one of the volunteer rooms and took a hot shower the next day, which is a treat for them, as they do not have warm water in their home. All in all, the day was wonderful and Lourdes was very excited about all her presents and visitors. Spiderman also stayed over for the night, before heading back to Cusco, taking with him all the memories of four amazing days with MSH.
Posted by MySmallHelp at 12:01 PM No comments:
Email ThisBlogThis!Share to TwitterShare to FacebookShare to Pinterest

On his third day, Alan went with Leander Hollings, Andres and a schoolfriend of Andres to Paru Paru. Paru Paru is the village Andres was born and raised in. It is located above Calca and therefore quite a long journey from Cusco, where Andres now lives. Andres never gets the opportunity to visit Paru Paru since being struck with Poliomielitis.


The group visited Paru Paru´s primary school, where Andres insisted on handing out bananas to the children, which was sponsored by Loki Hostel. Not able to part the bananas himself, he was helped by his schoolfriend to distribute the fruit. The children loved his wheelchair, and with Spiderman carrying Andres where wheelchair access was not possible, they were quite the attraction. 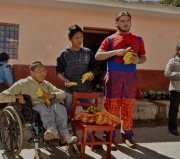 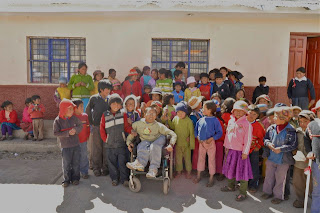 Andres and the schoolchildren


Andres and Spiderman were shown the school´s little museum with artefacts found in the area. The children themselves explained the meaning and use of each artifact, using sign language as the inhabitants of this little village only speak Quechua.

Later, the group went to look at a piece of land which Andres is the rightful owner. It is the place he lived when he could still walk, growing up a normal child like anyone else; during the time he had spent in hospital, the land was used by relatives of his, which now makes it difficult to claim back. MSH is helping Andres to claim his land back, on which he wants to build a tourist house as a means of support for him and his community.


Revisiting the places Andres used to know as a child, the group went to see the lagoons above Paru Paru. By chance, they met a woman who turned out to be a childhood friend of Andres. The two had always walked to the lagoons together when Andres could still use his legs, so the reunion was a very happy one, as they had not seen each other or heard from each other in years.

Spiderman, Andres, and his childhood friend with her baby in front of one of the lagoons

Spiderman and Andres exploring the lagoons


The next highlight of the day was meeting Andres´ grandparents. As his parents both passed away when he was smaller, his grandparents are the closest relatives remaining for him, and because they live in such a remote area, they never get a chance to meet. 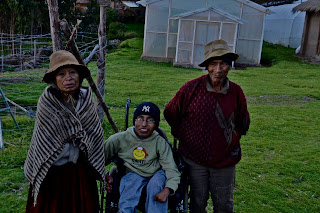 Andres with his grandparents


The day ended with the whole party watching a football game, one of Andres wishes, concluding this amazing day.
Posted by MySmallHelp at 11:52 AM No comments:
Email ThisBlogThis!Share to TwitterShare to FacebookShare to Pinterest
Spiderman visits Andres` school

Since 2010, after being released from hospital and moving into his own small room, Andres has been going to weekend school to help him reach his goal of studying at university.  It is a weekend school, which allows him to work during the week to finance his room and what he needs. He is a very capable and studious young man; his teachers and classmates think highly of him as he is sociable, dedicated and does not, in spite of his bodily condition, give up his dream of becoming a Systems Engineer.
His school celebrated its  anniversary last week, so Andres attended the celebration, together with Spiderman.

As always on these occasions, there were dances performed wearing the wonderful traditional costumes

One of Andres` teachers, Andres and Spiderman

Posted by MySmallHelp at 11:30 AM No comments:
Email ThisBlogThis!Share to TwitterShare to FacebookShare to Pinterest

Aiming to raise awareness of the situation of the people living in poverty or with a disability, Loki Hostel´s bar manager Alan Cotton agreed to take the challenge of wearing a Spiderman costume for six full weeks, only allowed to take it off to shower. Loki  Hostel is aiming to give back to the locals by supporting MySmallHelp (MSH). So, the funds Alan raises as Spiderman go to MSH, helping us to finance the school bus project and support twelve families in the area of Ollantaytambo and Trujillo, enabling their children access to education.


On his first day, Alan went to visit two of the children MSH is currently supporting in Cusco, Andres and Anita.


Andres is a young man of 24, who was born a normal child who enjoyed, running, playing and leading a life like anyone else. After a few years however, he developed an illness called Poliomielitis that caused Paraplegia to develop. This meant he could no longer move around using his legs; he also had general body paralysis. Andres ended up living in the San Juan de Dios Clinic in Cusco for six years. His parents have since passed away, leaving him with no other relatives to take care of him. Andres is now in a wheelchair; his hands appear useless at first sight, but thanks to his strength and his eagerness to learn more every day, he soon proves us wrong when we see what this little pair of hands is capable of doing.


Andres has a charming personality which is apparent as soon as you meet him. He is very intelligent and has no complexes despite his condition. He has not been able to attend school regularly and MSH is helping him to attend weekend school so that he can catch up and continue to make progress. He is very capable and anxious to learn more. Currently, he is living in a room that is in no way adequate for his condition: He does not have access to a bathroom and struggles getting through the door in his wheelchair, always needing help to enter and leave his room. He finances himself through working as a computer instructor during the week, paying for his room and food, struggling to get by. It is his dream to go to university and study Systems Engineering, to become a teacher and help others who suffer from a disability and teach them that anything is possible.


MSH organized a wheelchair for Andres and is always in close contact with him, helping him with his school fees and materials and trying to help out with what he needs most. Right now, Andres is struggling to get back a piece of land he rightly owns in Paru Paru, the village he was born in. During his absence (due to his illness), his relatives started using the land,making it difficult for Andres to claim it back. MSH is communicating with the president of the community as well as Andres´ relatives in order to enable him to reclaim his property, on which he aims to build a tourist house to support him and his community.


Spiderman visited Andres in his room, getting to know this amazing person. 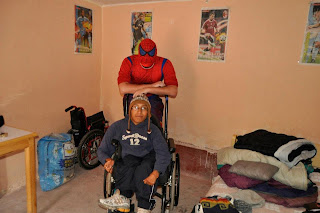 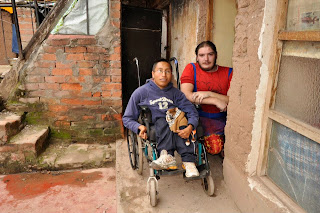 Here, they are in front of Andres` door; the problem with the door is that it does not open properly, so Andres always has trouble going through in his wheelchair.


Anita is an 11-year-old girl who was born with two congenital disorders called myelomeningecele and hydrocephalos. These disorders required her to have a valve inserted in her head to alleviate the symptoms of hydrocephalos. She also has hip deformities and club foot, as well as a squint required her to wear lenses since she was four years old. She cannot walk on her own, so is in a wheelchair; also, she has contonence problems which force her  to wear nappies. Anita lives in social housing provided by Asociación pro vivienda together with her family. Her mother is currently unemployed and works full time as a house wife and carer for Anita. Her father works at an ironmonger´s, his minimum wage barely covers all the necessary expenses of his family.
Anita is a very kind, cheerful and playful girl who loves playing with her pets as animals are her passion. Her school teacher tells us that she is very sociable, clever and intelligent.  She is able to understand everything, only struggling with writing at a regular pace, which makes it difficult for her to keep up with the other children.


MSH has helped Anita get a new wheelchair, as she was using and old small one, so now she feels much more comfortable. Also, we provide her with her nappies (she needs to be changed three to four times a day) and help her with her transport so she can go to hospital for checkups.


Here, Spiderman is posing with Anita, her sisters and her mother in their little backyard;  Anita`s sisters always help their mother in the household and do everything so Anita feels comfortable. 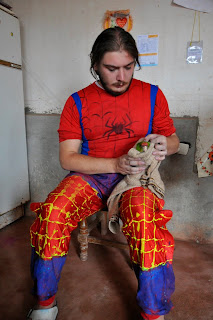 Spiderman with one of Anita`s beloved pets
Posted by MySmallHelp at 11:05 AM No comments:
Email ThisBlogThis!Share to TwitterShare to FacebookShare to Pinterest
Newer Posts Older Posts Home
Subscribe to: Posts (Atom)